The Electroplating Process Is A Great Demonstration Of Science At Work

First, we take your recordings (either on tape, digital, or vinyl master) and cut a lacquer (acetate) from the master recording. An acetate is a piece of aluminum coated with a layer of vinyl, into which grooves are cut, like a record. Unlike records, however, acetates are usually one sided, and come in pairs, one for each side of the album. They also often have two center holes; one hole is the standard center hole which acts as the axis for rotation, and the other hole is used by the guiding arm to turn the acetate while the writing stylus cuts the grooves. 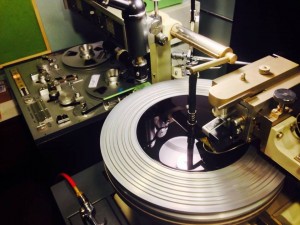 Once the audio is on the lacquer disc it is electroplated to make metal parts for replication. Mastered lacquers are chemically cleaned and sprayed with a silver solution. They are then placed into a nickel bath with high voltage charge. The electric current causes the nickel molecules to be attracted to the silver creating a build up of material. The more time given to this process the more material build up, the thicker the plate, hence different pricing for thickness. Once the desired thickness is reached the lacquer with nickel negative is cleaned and separated. 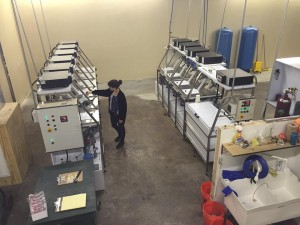 The 2-step electroplating process involves the father being peeled off the acetate and then itself being electroplated again to create the “mother”, which is in effect, the negative of the father plate. Typically, the mother plates are shelved for future use, and the father is used for stamping. 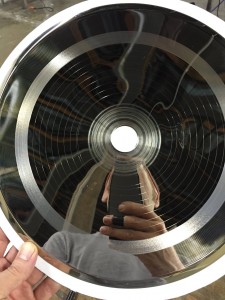 The 3-step electroplating process is just like the 2-step process except the mother is kept around to electroplate more stampers. Essentially, 3-step electroplating is simply just another step to make more parts. This is a good idea if you’re planning on making many copies of your vinyl. One father can produce 10 mothers, and one mother can produce 10 stampers. A single stamper can produce about 1000 records. If you do the math, you’ll figure out that the 2-step process will yield about 11,000 records before a new lacquer needs to be cut. The three step process can produce up to about 100,000 vinyl records before you have to cut a new lacquer. 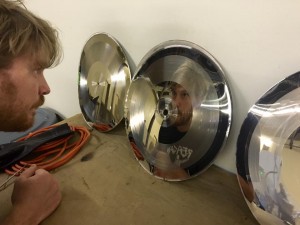